Ducklings at Constitution Gardens & the National Mall in Washington DC 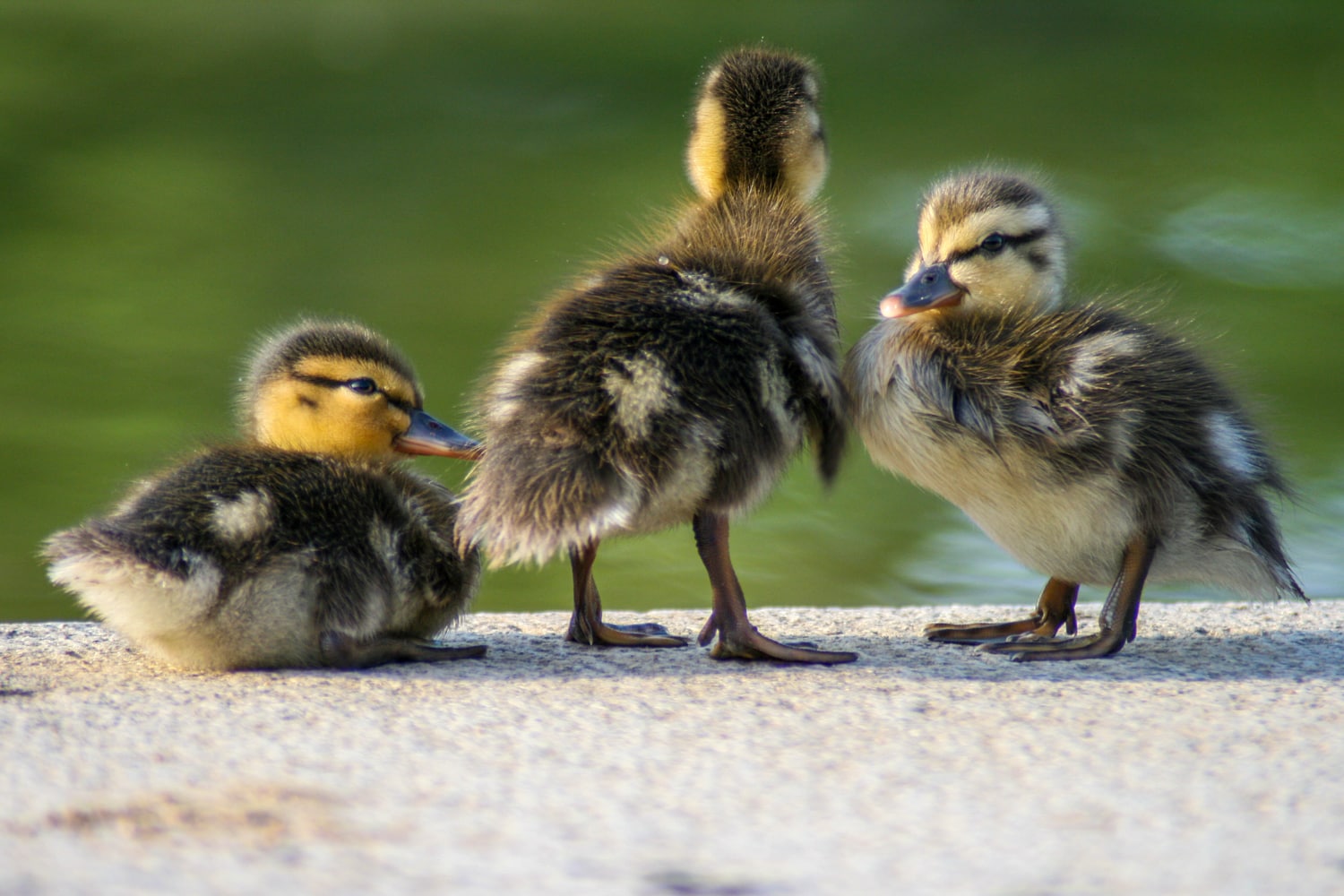 Every spring, tourists and locals alike swarm the Tidal Basin in Washington DC to see cherry blossoms. Everyone around the world knows that this is the time of year when DC is most beautiful! But many people – even DC locals – don’t realize that in less than a month, the city experiences its cutest season: when baby ducklings hatch in Constitution Gardens and the National Mall in Washington DC.

If you live in Washington DC or have the chance to visit in spring, I’m going to give you all the tips you need to experience adorable ducklings on the National Mall.  I always recommend seeing our baby ducks as a unique thing to do in Washington DC with kids.  Get ready to add it to your spring DC itinerary, or just read on for total cuteness overload!

Note: Some of the facilities of the National Mall are currently closed to support efforts to slow the spread of Coronavirus. This includes restrooms, concession operations and parking lots. Get up-to-date information here if you’re planning to visit.

What Exactly Is the National Mall?

Did you know that the area between the Lincoln Memorial, Washington Monument and U.S. Capitol is part of the National Park system?  It’s actually the most-visited U.S. National Park, with more than 25 million visitors each year!  That’s more than Yellowstone, Yosemite and the Grand Canyon combined.

The National Mall was originally envisioned by Pierre L’Enfant, a French engineer commissioned by President Washington in 1791 to develop a plan for the country’s new capital. L’Enfant imagined a grand, tree-lined avenue, flanked by embassies and gardens, to rival the capitals of Europe. Although few of the details of L’Enfant’s plan were realized at the time, it did provide a foundation for the next 200 years of National Mall design.

In 1902, a Senate commission issued the McMillan Plan. This plan re-imagined the Mall as the centerpiece of a larger, grander federal district. It replaced Victorian landscaping with a simple expanse of grass. It also proposed the construction of low, Neoclassical museums and cultural centers along the Mall’s east–west axis. Major memorials would be built on the western and southern anchors of the Mall (eventually realized as the Lincoln and Jefferson Memorials, respectively), as well as reflecting pools on the Mall, and terraces around the base of the Washington Monument.

Today, the National Mall’s wide walkways and grassy lawns are popular with both tourists and locals alike.  Smithsonian Museums, galleries, monuments and government buildings flank both sides.  During the day here you’ll see tours, school groups and joggers. In spring and summer evenings, flag football, kickball and other “social” sports teams take over the lawns.

And of course, in spring, there’s also gorgeous flowers and baby ducks!

Where is Constitution Gardens?

Constitution Gardens is a small park within the National Mall.  It’s tucked between the Vietnam Memorial, Constitution Avenue, and the Lincoln Memorial Reflecting Pool.

The land that now makes up the gardens was once under the Potomac River!  In the early 20th century, the Army Corps of Engineers dredged the area and built temporary offices during World War I.  A park was established here in 1976 to honor of the bicentennial anniversary of the American Revolution.  Later, in 1982, a memorial to the 56 Signers of the Declaration of Independence was dedicated. This small monument on an island in the lake is accessible to pedestrian traffic via a footbridge.

Constitution Gardens has a lovely view of the Washington Monument. You’ll often see geese families here in spring in addition to the ducks.

When to See Baby Ducklings on the National Mall

In mid-April to mid-May of each year, entire families of mallard ducks take up residence in the ponds and open water around the city.  I like to try to photograph ducks in the early morning and late afternoon when the parks are less crowded and the light is more golden.

These are the most common places to see baby ducks in Washington DC.  Numbers at each location can vary from year to year, based on preferred nesting locations. A mother duck will lead her babies to the open water closest to her nest.

Constitution Gardens is one of my favorite places to see ducklings, because there isn’t as much foot traffic.  The ducks here are active. You can get great action shots of them in the water as they splash around and follow their parents.  Some of the paths here are gravel, so keep in mind it could be more difficult to navigate with strollers and wheelchairs than the Lincoln Memorial.  There are benches, though, and it’s a great place for a spring picnic!

Smaller numbers of duck families can be found at the Reflecting Pool of the U.S. Capitol Building.  The reflecting pool is a good place to see sunset on the National Mall, too.

The Reflecting Pool at the Lincoln Memorial is my second-favorite place to see baby ducks, especially in late afternoon.  The ducks often nap (!) in a pile along the edge of the pool, and the light is really beautiful here at golden hour.  I think it’s easier to get close-up photos here because of the angles and edges of the pool. The walkways are paved, but it’s often more crowded than other duckling locations.

Some ducks pick a nesting spot in the upscale DC neighborhood of Georgetown. Then they make their way down to the canal and Georgetown waterfront area after the babies hatch.

Ducks that nest in the Northeast part of the city head to Rock Creek Woods as their water source.  One of the largest natural urban parks in the country, Rock Creek Park’s namesake creek flows through 9 miles of the city.  Due to the size of the park, this isn’t my recommended place to try to find ducks.  But you’re here anyway for a run or to explore, keep an eye out for ducklings!

Why Are There So Many Ducks in DC?

Although Washington DC’s parks might be small, they are plentiful. Most DC residents live within a 10-minute walk of a park.  This means that there’s a lot of attractive options for duck nest-building also.

Ducks migrate to Washington DC every spring. Each pair of ducks picks a nesting site and nearby water source before the hen lays her eggs.  Usually, these two locations are less than a mile apart. Once the ducklings hatch, the mama duck needs to lead her flock to a water source within 48 hours so that they can feed.  Often, her mate is waiting for her there, and the family is reunited.

The local wildlife rehabilitation center City Wildlife has a Duck Watch program. With the help of locals, they monitor DC duck nests.  The group can even assist if a family gets stranded.  Sometimes this means helping a family cross busy Washington DC streets to get to their water source!

Baby ducks move really quickly through the water, so be ready to take a lot of photos to get good ones!  If you have a zoom lens or a camera with a digital zoom function, that will help as well.  Really close-up shots will show their cute facial expressions and beads of water in their fluffy feathers.

Remember to keep your distance from the ducks and not to disturb them. Mother ducks and especially geese can get agitated if you get too close to their babies.

When photographing animals (and children), try to take the shot from their eye level.  You might even see photographers laying down on paths to get close-up shots of the ducks!

My best duck photos have been in the late afternoon when the light is more golden. But it’s definitely easier to get crisp shots when there’s more light, so you can use a faster shutter speed and not end up with blurry photos.

Looking for more outdoor things to do in Washington DC?

Check out my comprehensive guide to experiencing spring cherry blossoms in Washington DC! Or get my tips on the best Washington DC area gardens by blooming season.

Where to See Cherry Blossoms in DC: Map & Insider’s Guide

Last Updated on March 25, 2021 Every city is beautiful in spring, but spring in Washington, D.C. is something extra …

Washington DC has more than just cherry blossoms! Find out what’s in bloom now with this guide to the best Washington DC gardens, grouped by blooming season.

Pin this Guide to Seeing Washington DC Ducklings on the National Mall for later!

I hope that this guide has convinced you to add Washington DC’s cutest residents to your itinerary!  This is one of the best things to do in Washington DC with kids in spring. It’s also a great DC itinerary addition for nature lovers!

Latest Posts from The Haphazard Traveler