JFK Layover at the TWA Hotel 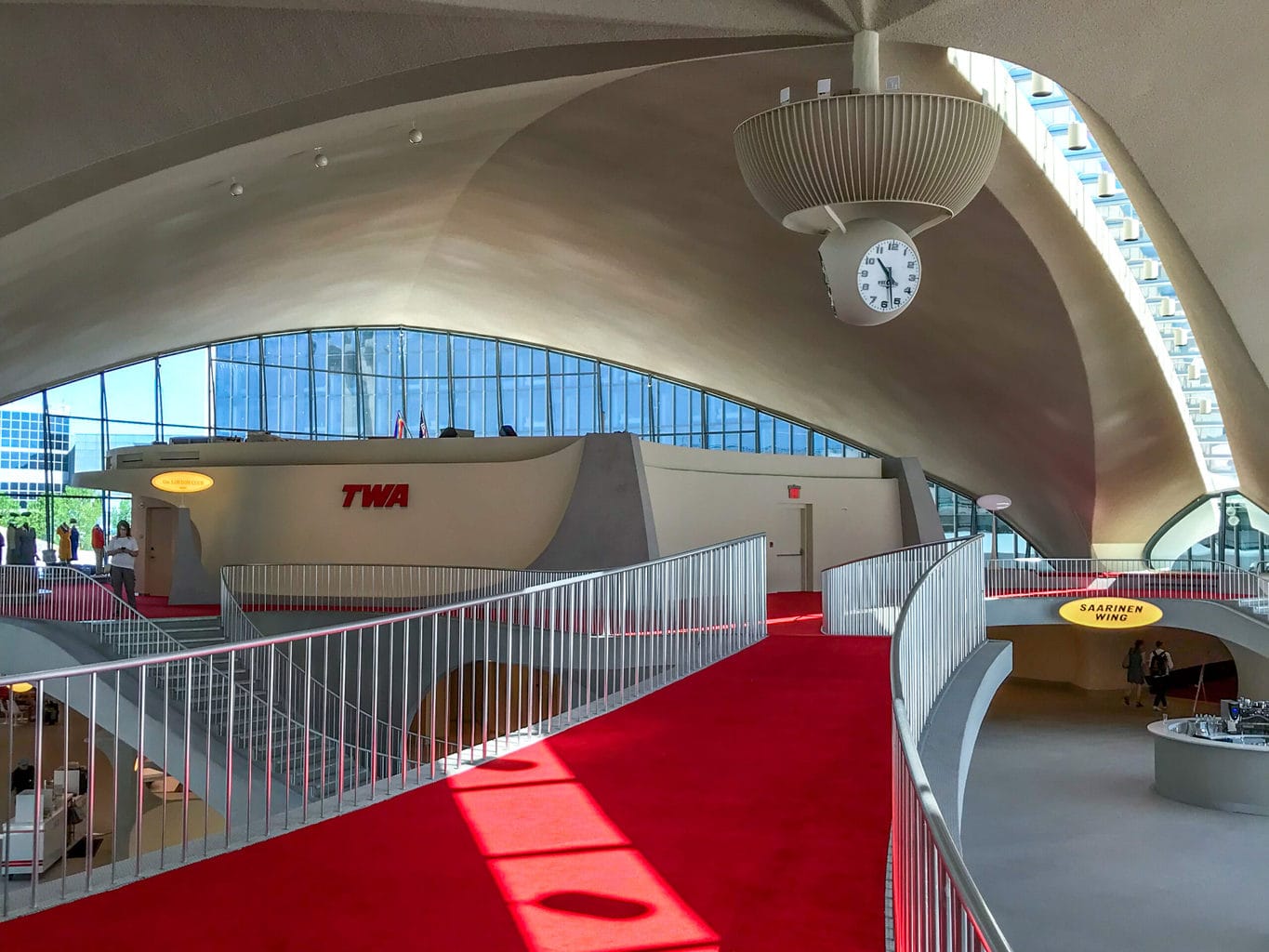 I’ve been a fan of mid-century architecture and design as long as I can remember. As a kid, I used to beg my dad to take me to vintage furniture shops in Austin, Texas long before retro design was trendy again. So when the former TWA Flight Center terminal at JFK Airport was converted into an airport hotel in 2019, I had to visit! the TWA hotel is perfect for a long JFK layover in New York City, complete with swanky hotel rooms and day stays. But there’s also lots of things to do for your JFK layover: visiting the TWA Hotel restaurants, rooftop pool, cocktail lounges and aviation history exhibits!

In short, some people go to Disney World; I go to the TWA Hotel. And you should too! Whether it’s a long layover, overnight stopover or weekend getaway, I’ve got inside tips for visiting the TWA Hotel at the JFK Airport.

Completed in 1962 by architect Eero Saarinen, the TWA Flight Center terminal was a jet-age marvel as the headquarters of Trans World Airlines. It was one of the first airport terminals with enclosed passenger jetways, baggage carousels, and gates separate from the main terminal.

Saarinen received the commission in 1955 to design the TWA Flight Center as part of an expansion of the New York International Airport. The main terminal itself, known as the “head house,” featured soaring architectural wings and windows with expansive views of arriving and departing jets. Futuristic red-carpeted tubes led passengers to the terminal and gates. Strips of skylights separated the four wings of the head house.

The TWA Flight Center quickly became an architectural icon and one of the most-recognizable airport buildings in the world.

Saarinen was a Finnish-American architect and designer born in 1910 who studied architecture at Yale University. His other best-known works include Dulles International Airport in Washington, D.C. (another fave of mine!) and the St. Louis Gateway Arch. He also designed furniture for the Knoll studio including the Womb Chair.

Saarinen died unexpectedly in 1961 of a brain tumor, and the terminal was completed under the supervision of other architects in his firm. The TWA Flight Center opened on May 28, 1962. Saarinen was awarded the American Institute of Architects (AIA) Gold Medal posthumously for its futuristic, visionary, and efficient design.

Recognition as a Landmark and Decline

In 1994 the City of New York designated both the interior and exterior of the TWA Flight Center a historic landmark. But with the airline’s sale to American Airlines in 2001, the terminal closed in October of that year.

The TWA terminal languished unused for years, even after being added to the National Register of Historic Places in 2005.

Also in 2005, a new Jet Blue Terminal was added behind the building, and portions of the original TWA Terminal were demolished to make room for it. Other historic JFK airline terminals met an even worse fate: among others, the American Airlines Terminal 8 was replaced in 2008. Delta replaced the former Pan Am WorldPort Terminal in 2013. And architect I.M. Pei’s Sundrome Terminal 6 was demolished in 2011.

Reimagining as the TWA Hotel

Finally, in 2015, the TWA Hotel had a purpose again and a developer. The next year, construction began on the project of transforming the TWA Flight Center into a hotel. The $265 million renovation added 512 hotel rooms in two new tower wings named after Howard Hughes (a TWA owner) and Saarinen. Amenities would include a rooftop pool bar and observation deck with views of the runway, the world’s largest hotel gym, meeting spaces, restaurants and cocktail lounges.

The hotel opened in May 2019, to (quite honestly) very poor reviews. People reported that the opening was rushed, and the quick-service food hall was even shut down due to health code violations.

Still, the pool, restaurants and lounges were open, and all the photos I saw looked amazing. I couldn’t wait to visit! I had wanted to see the terminal FOREVER, and had even considered flying up once for an architecture tour in 2015. So I planned a trip for late June. I used airline miles to book a flight from DC, and splurged for a runway view room.

Currently TWA Hotel stays can only be booked through the hotel website. Booking options include overnight stays and “day stays,” if you have a long layover.

Reservations for the lounges and restaurants are recommended and can be made online. But whether you have four hours or four days, the TWA Hotel is a great way to recharge and step back into the past on a layover or getaway.

JFK Layover at the TWA Hotel

The lounges and restaurants at the TWA Hotel are accessible even if you don’t book a stay there. Got a long layover at the hotel with enough time to get back through security again? You can check out the Sunken Lounge or Connie cocktail bars, the Paris Cafe restaurant, and the exhibits of aviation history throughout the terminal. They’ll also keep your luggage at the front desk of the hotel while you visit during a layover.

If you’ve got a longer layover, day stays are also available in set time slots. Rates range from $119 for 4 hours to $149 for an 8AM-8PM stay. Check out the TWA Hotel day stay options here. (If you choose the day of your arrival, you will get options for both overnight and day stays in the results.)

Visiting the TWA Hotel for a JFK Stopover

Traveling to an East Coast destination? Add on an overnight stop (known in airline lingo as a “stopover”) at the TWA Hotel to your itinerary! Just use the “multi-city” search option to add a stop at JFK into your search. Be sure to book your onward departure from JFK for the next day. Because it’s all on the same itinerary, it often doesn’t add much, if anything, to the flight cost. See an example below:

Visiting the TWA Hotel for a Weekend Getaway or Overnight Stay

When I visited, I met a lot of New Yorkers there for weekend. It’s also a hotspot for aviation buffs: the rooftop pool deck had a corner full of photographers shooting the planes taking off! I also chatted with people on Instagram who planned to visit for a bachelorette party. Others wanted to visit because they used to work for TWA and want to see the terminal brought back to life again.

The TWA Hotel is also the only on-terminal hotel located at the JFK airport. So if you’re stuck there, at least there’s a swank stopover option!

Overnight stays in rooms at the TWA Hotel start at $179 depending on the dates and the room type. Options include king rooms, rooms with runway views, and suites ranging up to the Howard Hughes Presidential Suite! Check out current room rates here and book online.

Getting to the TWA Hotel for your JFK Layover or Stay

You can also walk to Terminal 5 outside the airport. I did this, and considered climbing over a Jersey wall when I realized I’d have to walk past the hotel and into the JetBlue Terminal to get to it. But for safety reasons, I recommend taking the train.

You can also take the Air Train from the Howard Beach or Jamaica subway stations to get to the TWA Hotel.

The hotel does offer parking, with options from $10/hour up to a 7-day park-and-fly for $150. Or self-parking is available in the airport’s Yellow lot.

Get Ready for Your Own JFK Layover at the TWA Hotel!

The TWA Hotel was everything I hoped for, combining my two loves: travel and mid-century design. It saved an architectural icon, and was such a fun weekend getaway from Washington, D.C. I’d love to return again, even if it’s only for a JFK airport layover!

If you fall in love with it as much as I did, there’s also a TWA gift shop featuring everything from TWA wings pins to hoodies and scarves to commemorate your visit.

Check out more of my architecture travel in Seoul, Korea!

Seoul Architecture & Instagram Spots: Unique Things to Do in Seoul

In Asia By Adrienne, The Haphazard Traveler

Last Updated on February 23, 2021 Seoul, Korea is a fascinating juxtaposition of new and old, traditional and ultra-modern.  With …

Don’t have time to leave the terminal? Find out how to get airport lounge access without elite status and snag a $10 lounge app credit!

Latest Posts from The Haphazard Traveler